Thanks to all 1049 Backers on Kickstarter!

We reached a total of $89.148 with our 3 successful Eternity Dice campaigns. 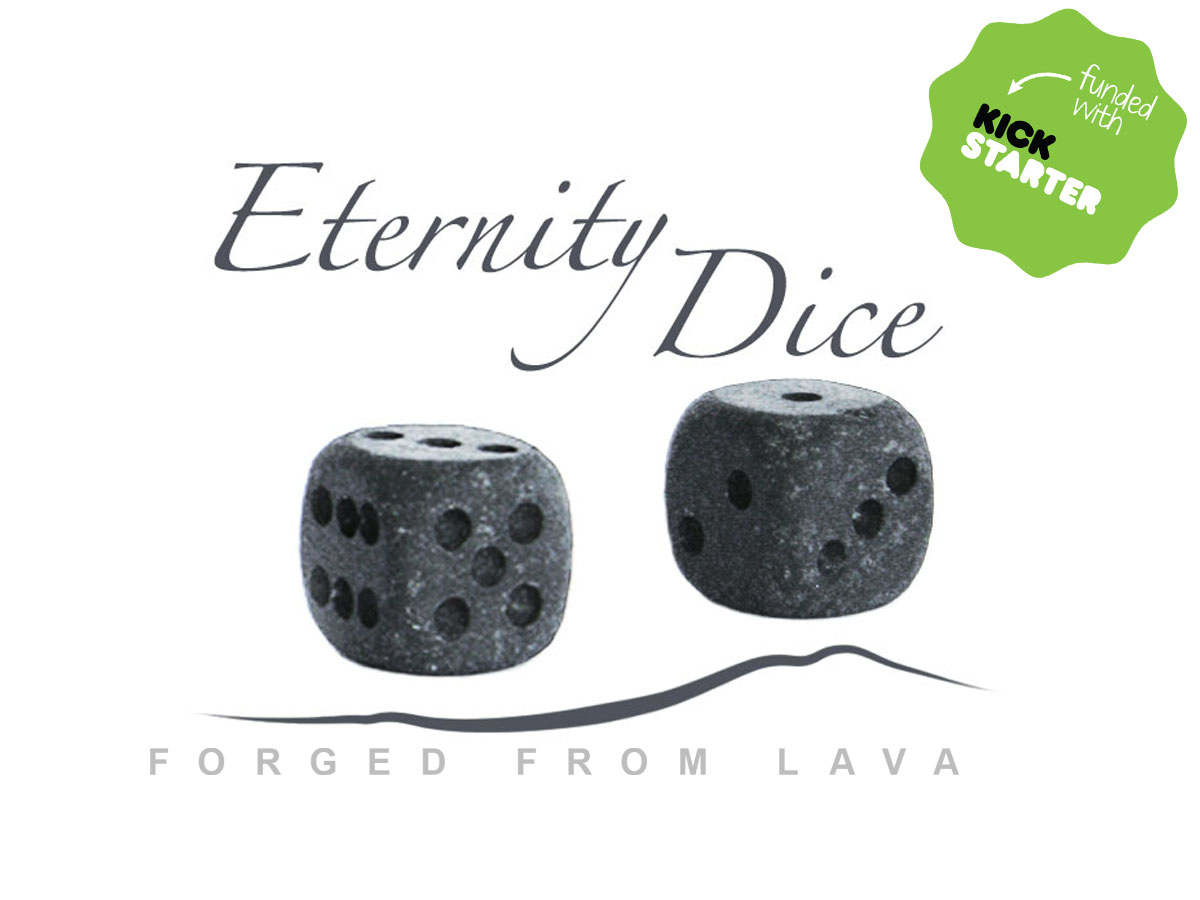 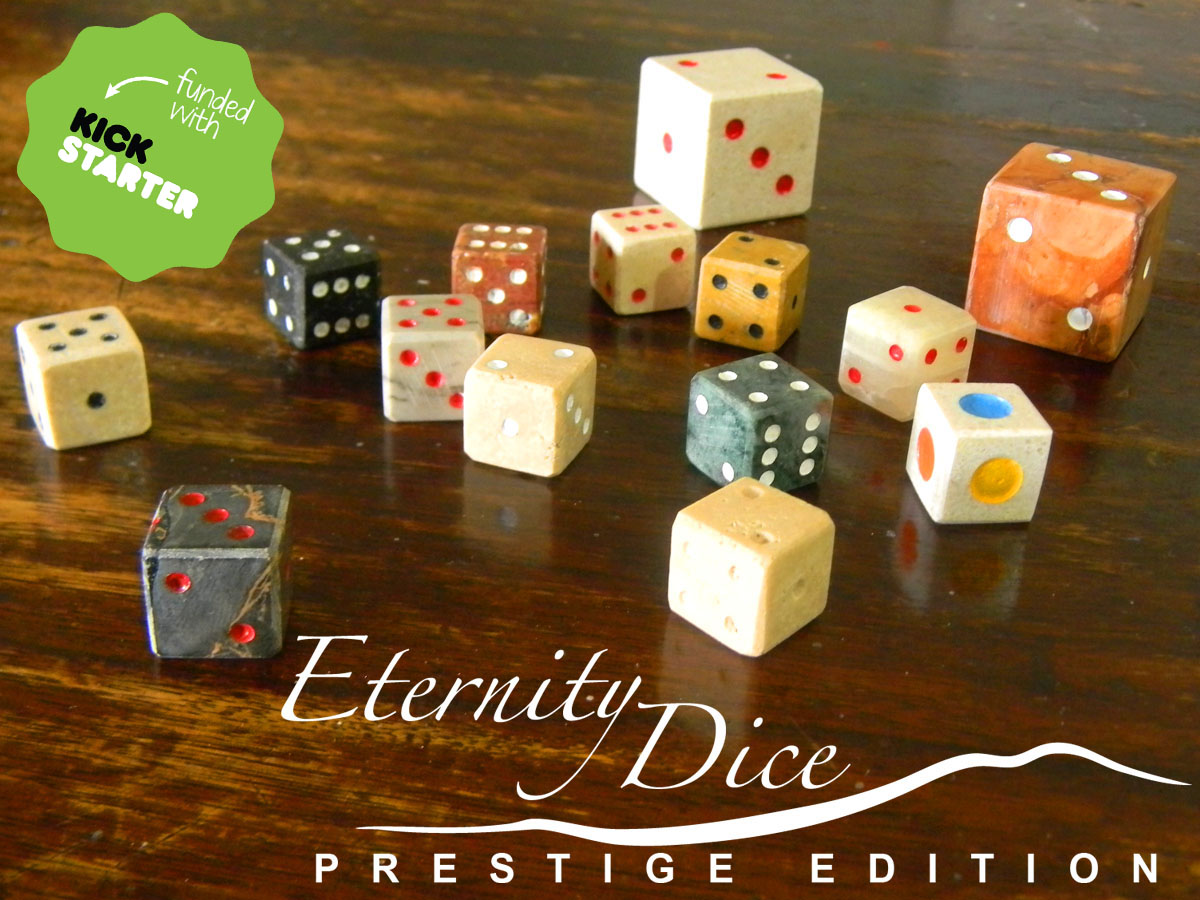 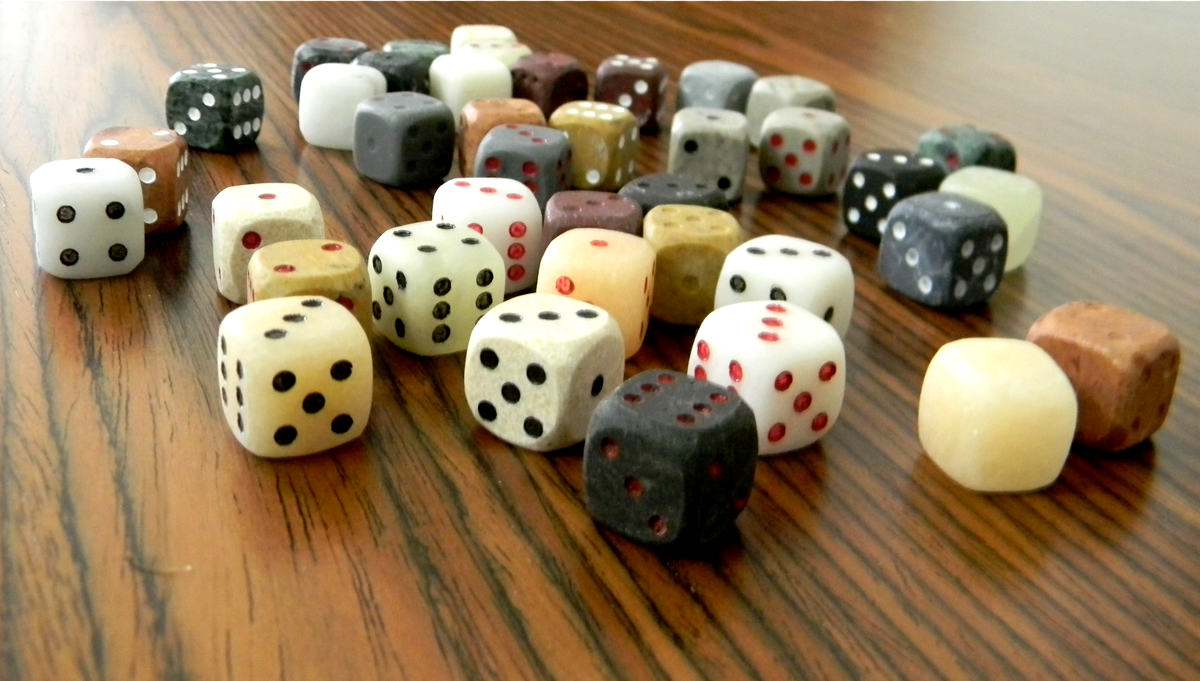 Eternity Dice is an exclusive collection for Kickstarter: all dice are completely handmade one by one for demanding gamers, containing all the energy and color of our planet.

Each dice set is enclosed in an elegant wooden box, made unique by your engraved name. 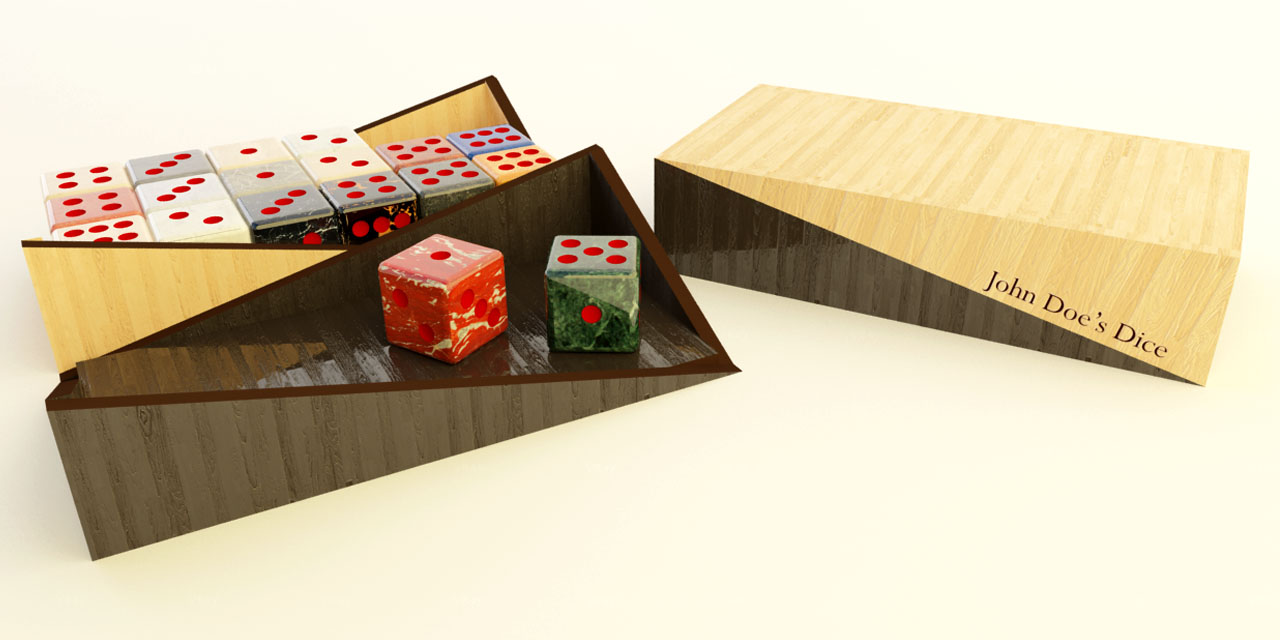 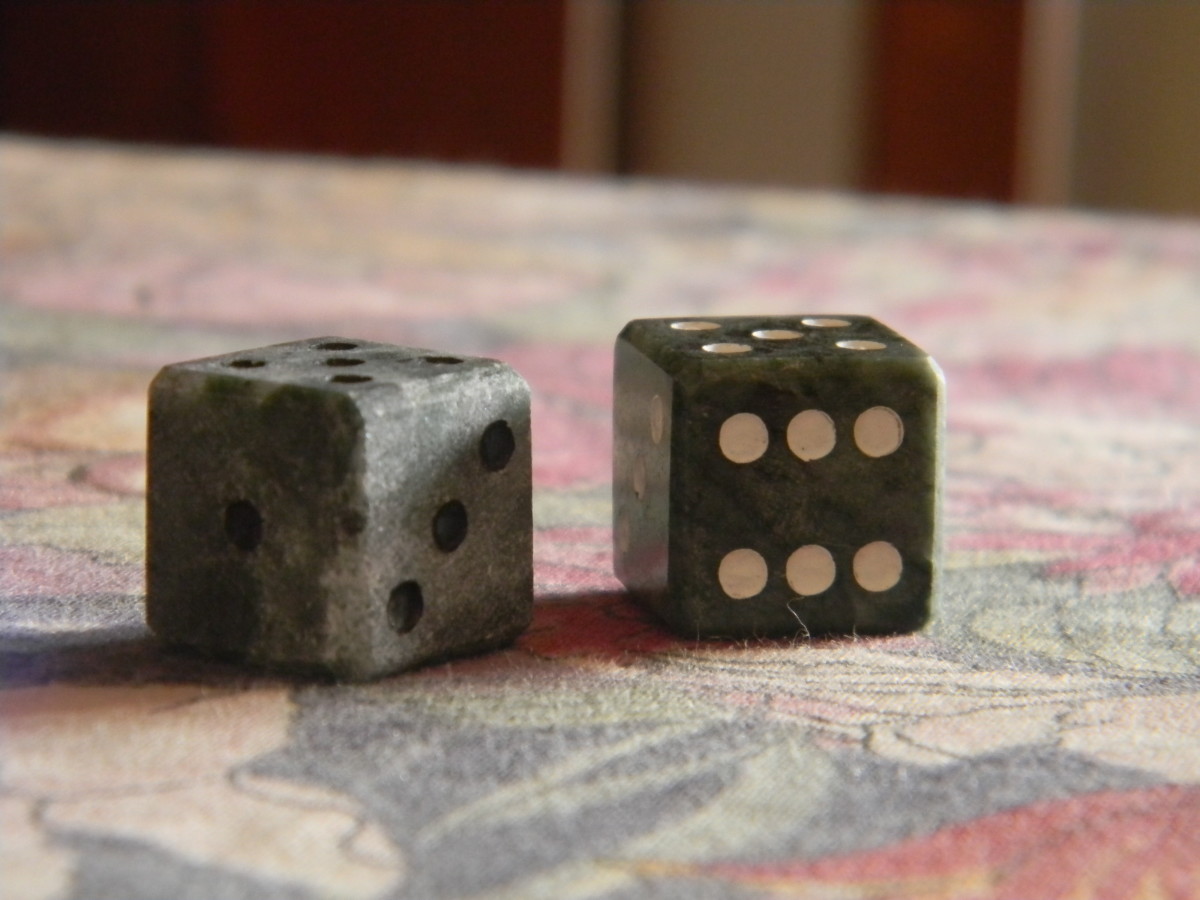 These little jewels combine their history genesis and the echoes from Mother Earth, with 20 different available stones from all over the world.

This really is the ultimate collection.

Every die is carved by hand and no one is equal to the other, thanks to the peculiarity of each marble slab. Every die is unique in the world and nobody can replicate the grain of each piece. 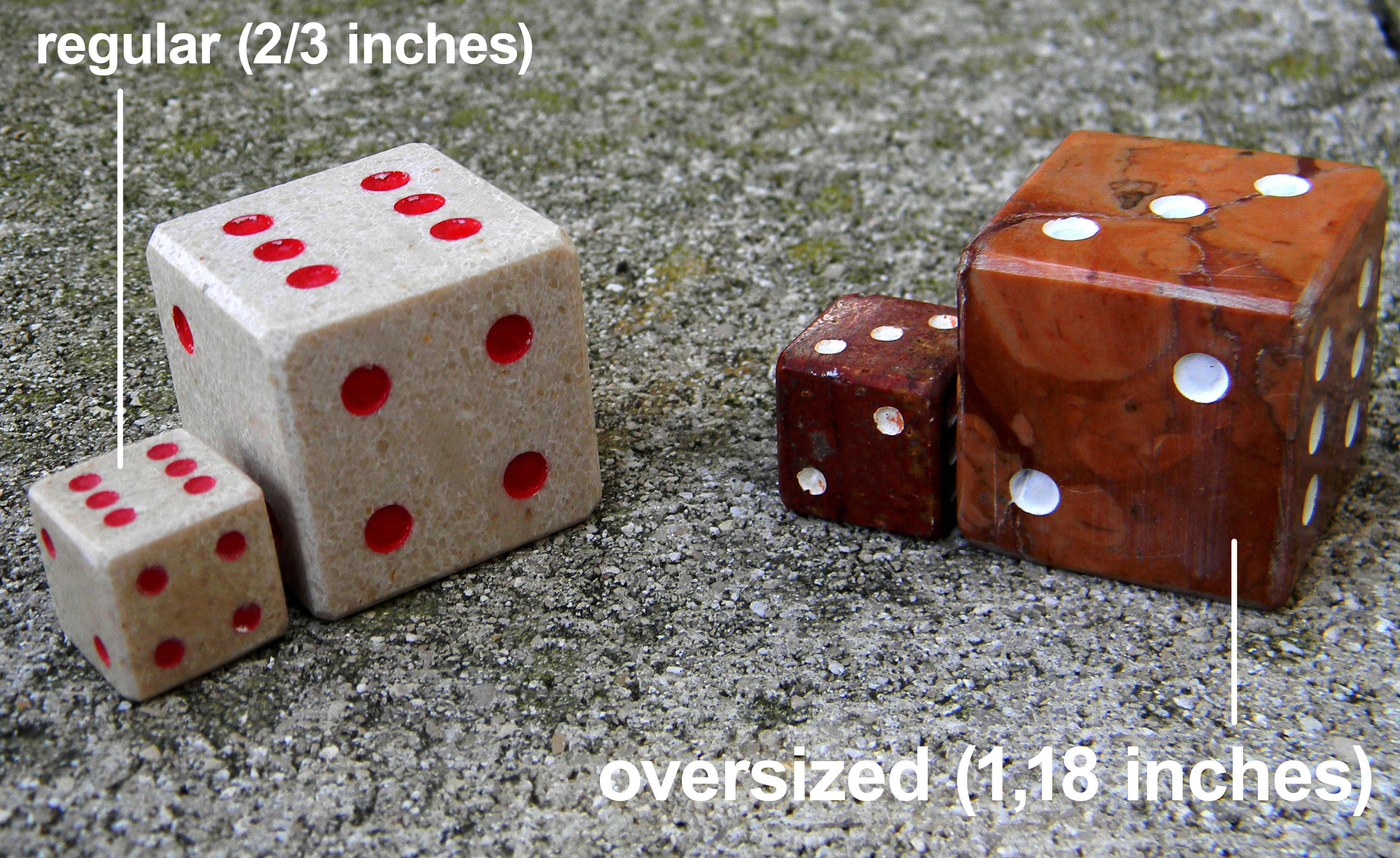 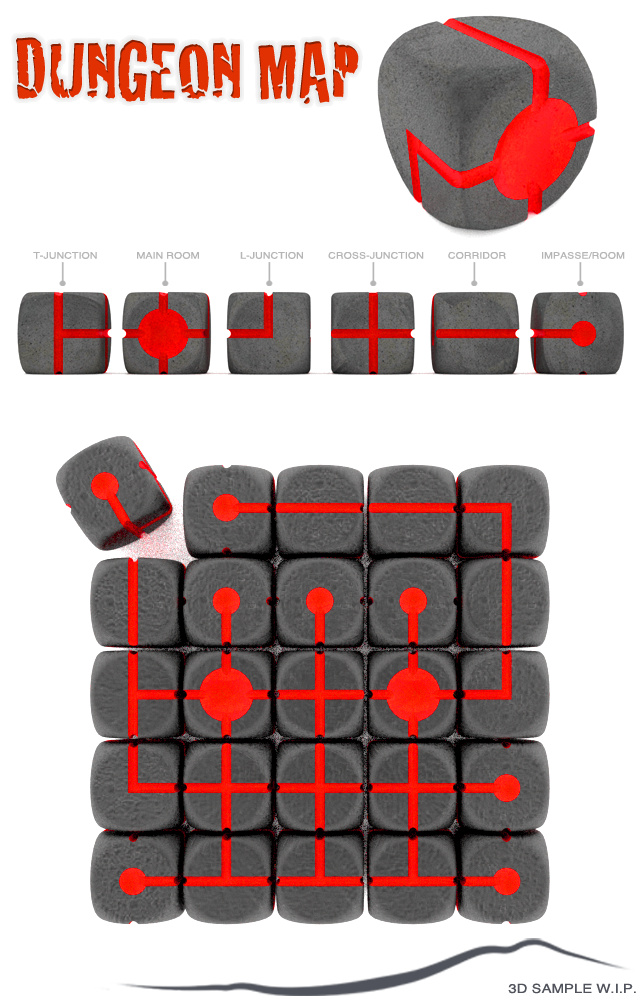 the materials we use for our dice

The "Giallo Reale" comes from the hills of Siena. Its yellow color recalls gold, sun and light, it's a symbol of luxury and power, and an emblem of military triumphs, coronations, weddings gifts. For these reasons and also for its rarity, it's called "lithic gold". The beauty of this yellow marble is due to its grain, from white-ivory to blue-gray and reddish, which offer a stunning multi-colored universe, capable of arousing feelings of admiration and stimulate artistic creativity. The "Giallo Siena" is very beautiful to look at with its beautiful colors in warm tones due to the infiltration of iron oxides.

The “Portoro” or “Portovenere marble” is an incredible black marble with gold and silver veins. It is a refined variety of black marble from La Spezia (Italy). Geologically it is a limestone of Jurassic era with carbonate limonite veins. The name “Portoro” comes from the Italian translation of the French “porte d'or” (golden gate), as this marble was called during the French domination. In English this variety of marble is known as “black and gold”. At the beginning of the nineteenth century the use of this marble also spread out from Liguria, in particular France, Belgium and Switzerland to adorn palaces and castles like those of Versailles, Marly and Compiegne. Virginia Oldoini, the Countess of Castiglione (lover of Napoleon III), covered her rooms with the Portoro marble. Later it was also exported to the United States where it was used to cover the screening room of the Paramount.

“Rosa Portogallo” (pink marble) came from Estremoz, Portugal. It has been used since Antiquity as a material for sculpture and architecture. The first exports in Roman times were probably for the construction of the Circus Maximus of Emerita Augusta, in modern day Spain. The Portuguese navigators exported this marble to Africa, India and Brazil. The marble from this region was used in famed locations such as the Monastery of Jerónimos, the Monastery of Batalha, the Monastery of Alcobaça and the Tower of Belém. Portugal is the second largest exporter of marble in the world, surpassed only by Italy (Carrara marble). In the quarries, marble blocks are cut from the rock with a diamond wire saw, a durable steel cable with a series of circular diamond beads. The wire saw may need a day to cut through the marble.

The Trani Stone is a carbonate rock mined in Puglia in the Murgia area, from quarries located near the city of Trani. This stone was used for constructions and local artworks such as the Cathedral of Trani, the monument for Cesare Bazzani and the “Casa del Fascio” (Como).

The lava of Vesuvius is different from that of Etna or the Aeolian islands since, modifying itself during the centuries, it has become rich in potassium and has decreased its quantity of silice, coming to be harder than marble.

It is a gray marble containing fossil remains. These very compact stones were used since ancient times for the flooring and in architectural ornaments in Veneto, Friuli and Slovenia. Today, as a demonstration of their durability, this marble still retains the original features.

Azul Cielo marble is a metamorphic medium-grained crystalline marble derived from the Ordovician Geological period (about 500 million years ago), resulting from regional or at times contact metamorphism of sedimentary carbonate rocks, either limestone or dolostone. This metamorphic process causes a complete recrystallization of the original rock into an interlocking mosaic of calcite and/or dolomite crystals. This marble has become a cultural symbol of tradition and refined taste. Its extremely varied and colorful patterns make it a favorite decorative material.

Travertino is a form of limestone deposited by mineral springs, especially hot springs. It often has a fibrous or concentric appearance and exists in white, tan, and cream-colored varieties. Travertino derived from a process of rapid precipitation of calcium carbonate, often at the mouth of a hot spring or in a limestone cave. In the latter, it can form stalactites, stalagmites, and other speleothems. It is frequently used in Italy and elsewhere as a building material. The Romans mined deposits of travertine for building temples, aqueducts, monuments, bath complexes, and amphitheaters such as the Colosseum, the largest building in the world made mostly of travertine.

Bianco di Carrara, is a type of white or blue-grey marble popular for use in sculpture and building decor. It is quarried at the city of Carrara in the province of Massa and Carrara in modern day Tuscany, Italy. The marble quarries were monitored by the Cybo and Malaspina families who ruled over Massa and Carrara during the 17th and 18th centuries. The family created the Office of Marble in 1564 to regulate the marble mining industry. The city of Massa, in particular, saw much of its plan redesigned (new roads, plazas, intersections, pavings) in order to make it worthy of an Italian country's capital. The Basilica of Massa is built entirely of Carrara marble and the old Ducal Palace of Massa was used to showcase the precious stone.

Sivec is the trademark of the dolomitic marble extracted from the quarries of Mermeren Kombinat A.D. Prilep, near the town of Prilep in Macedonia. The fine grain makes it ideal for sculpture and architectural applications. The extraction of this marble can be dated back to 500 BC and earlier. Sivec is a famous material that was used in south-east Europe from the 3rd century BC until the 5th century AD, producing some of the most visually stunning creations of the ancient world. It was used for the reconstruction of the Roman emperor Diocletian's Palace in Split, Croatia. It has been also used by Edvard Ravnikar for lines at Prešeren Square in Ljubljana, Slovenia. The marble-bearing deposits in the area are widely known and are among the largest in the world.

The "Rosso Verona" (red marble) is a nodular limestone belonging to the polishable limestone group. It contains fossil skeletons of ammonites and belemnites rostra of microsparitica immersed in a matrix formed by fecal pellets. It can be extracted from the “Rosso Ammonitico Veronese” or the “Scaglia Rossa”, both emerging and extracted in the Lessini Mountains.

Some would say that the term "blue quartz" is reserved for rock crystal that appears blue by Rayleigh scattering of light at microscopic inclusions. The color is caused by inclusions of other minerals, and not by built-in trace elements or lattice defects, like in amethyst, for example. Because of this rather open definition, Blue Quartz could came from differents Countries and since we used a Blue Quartz compound (stone veneer), it has a high hardness.

The "Verde Alpi" marble is related to the Italian tradition and it consists of a deep green heart, with elegant veining clearer.

The “Bardiglio Imperiale” comes from Carrara (Italy) and its tipical color is an intense ashen blue, with whitish or dark veins.

The "Nero Marquina" is a black marble widely used for fine ornamental works. Its black color with clear grains make it a material of the highest international level. The "Nero Marquina" marble is often used in checkered flooring together with white Carrara marble.

The “Rosso Francia” was widely used in the reign of Louis XIV. Versailles was grandly decorated with this red colored marbles that came from the South of France. Although from many quarries they were grouped under the name of “Languedoc Red”. The Grand Trianon palace in particular was decorated with mantels in these marbles. Rosso Francia alone symbolize the passion for marble of the architects and Kings of the French “Ancien Régime”.

Persian Red Travertine or Iran Travertine Stone is an interesting natural stone, generally harder than limestone but softer than marble. It is a kind of limestone deposited by the water of mineral springs (especially hot springs) or streams saturated with calcium carbonate. The colour of the stone is due to the iron content in travertine. As they are naturally made due to earth pressure and temperature the content of iron varies and so does colour in each batch.